Good morning, everyone! My name is Julie Goodale. I've been married to Tom for 18 years (in five days), and I'm mom to Kate (16) and Cole (13). In addition to those three, I'm so thankful to be on mission with our awesome community group and some of my favorite people ever at Watermark Urgent Care! Come join us if you would like a front row seat to all that God is choosing to do at the clinics! I'm excited to dive into Matthew 8 with you today! Let's go!

It's one thing to say that we believe in Jesus. But when we are faced with difficult circumstances, our actions and attitudes must reflect our faith.

But the centurion replied, "Lord, I am not worthy to have you come under my roof, but only say the word, and my servant will be healed."

1 When he came down from the mountain, great crowds followed him. 2 And behold, a leper 1 8:2 Leprosy was a term for several skin diseases; see Leviticus 13 came to him and knelt before him, saying, “Lord, if you will, you can make me clean.” 3 And Jesus 2 8:3 Greek he stretched out his hand and touched him, saying, “I will; be clean.” And immediately his leprosy was cleansed. 4 And Jesus said to him, “See that you say nothing to anyone, but go, show yourself to the priest and offer the gift that Moses commanded, for a proof to them.”

The Faith of a Centurion

5 When he had entered Capernaum, a centurion came forward to him, appealing to him, 6 “Lord, my servant is lying paralyzed at home, suffering terribly.” 7 And he said to him, “I will come and heal him.” 8 But the centurion replied, “Lord, I am not worthy to have you come under my roof, but only say the word, and my servant will be healed. 9 For I too am a man under authority, with soldiers under me. And I say to one, ‘Go,’ and he goes, and to another, ‘Come,’ and he comes, and to my servant, 3 8:9 Or bondservant ‘Do this,’ and he does it.” 10 When Jesus heard this, he marveled and said to those who followed him, “Truly, I tell you, with no one in Israel 4 8:10 Some manuscripts not even in Israel have I found such faith. 11 I tell you, many will come from east and west and recline at table with Abraham, Isaac, and Jacob in the kingdom of heaven, 12 while the sons of the kingdom will be thrown into the outer darkness. In that place there will be weeping and gnashing of teeth.” 13 And to the centurion Jesus said, “Go; let it be done for you as you have believed.” And the servant was healed at that very moment.

14 And when Jesus entered Peter's house, he saw his mother-in-law lying sick with a fever. 15 He touched her hand, and the fever left her, and she rose and began to serve him. 16 That evening they brought to him many who were oppressed by demons, and he cast out the spirits with a word and healed all who were sick. 17 This was to fulfill what was spoken by the prophet Isaiah: “He took our illnesses and bore our diseases.”

The Cost of Following Jesus

23 And when he got into the boat, his disciples followed him. 24 And behold, there arose a great storm on the sea, so that the boat was being swamped by the waves; but he was asleep. 25 And they went and woke him, saying, “Save us, Lord; we are perishing.” 26 And he said to them, “Why are you afraid, O you of little faith?” Then he rose and rebuked the winds and the sea, and there was a great calm. 27 And the men marveled, saying, “What sort of man is this, that even winds and sea obey him?”

28 And when he came to the other side, to the country of the Gadarenes, 5 8:28 Some manuscripts Gergesenes; some Gerasenes two demon-possessed 6 8:28 Greek daimonizomai (demonized); also verse 33; elsewhere rendered oppressed by demons men met him, coming out of the tombs, so fierce that no one could pass that way. 29 And behold, they cried out, “What have you to do with us, O Son of God? Have you come here to torment us before the time?” 30 Now a herd of many pigs was feeding at some distance from them. 31 And the demons begged him, saying, “If you cast us out, send us away into the herd of pigs.” 32 And he said to them, “Go.” So they came out and went into the pigs, and behold, the whole herd rushed down the steep bank into the sea and drowned in the waters. 33 The herdsmen fled, and going into the city they told everything, especially what had happened to the demon-possessed men. 34 And behold, all the city came out to meet Jesus, and when they saw him, they begged him to leave their region. 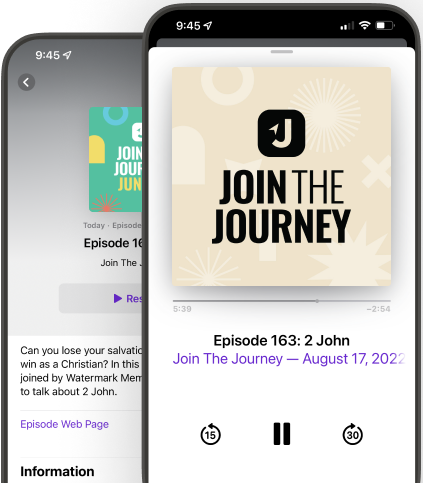 In this chapter of Matthew, we see Jesus perform many miracles. He is full of compassion toward the man with leprosy, to Peter's mother-in-law, and to several others. However, out of all of these stories, I am most in awe of the centurion, at whom Jesus marveled and said to those around Him, "Truly, I tell you, with no one in Israel have I found such faith." (Matthew 8:10)

All too often, when I find myself in difficult circumstances, my thoughts go to, "What do I need to do? How can I get out of this? Who can help me through this?" I think those things instead of running straight to the Lord as my rock and refuge that I can trust (Psalm 91:2).

It is even more convicting when I think about who the centurion was. He was a Gentile and a Roman soldier and would have been one of the least likely people to trust Jesus. Yet, we see him in this story putting all of his trust in Jesus as he believed Jesus could heal his servant. Instead of talking about his worthiness or achievements as a centurion, he acknowledged Jesus as the One who was worthy and all-powerful. He came in humility and acknowledged Jesus' authority by faith.

I desire to have the kind of faith that would cause Jesus to marvel. What keeps me from this? Usually my limited perspective plays a large part. I can get so caught up in the day-to-day things of this world that it causes my perspective to shift from the eternal to the temporal.

One of my favorite things about serving at Watermark Urgent Care is the reminder of the importance of the eternal perspective (Colossians 3:2). Our patients come in to find physical healing, but we know that physical healing is temporary. The most important thing we can offer them is the truth of the gospel and how their spiritual healing is their deepest need.

May we find true freedom as we keep our perspective on what really matters and live for Christ, loving and serving His people (Galatians 5:13).

1. What is it that keeps you from going all in and truly trusting God, especially in difficult times?

2. Based on your answer to Question 1, what Scripture can you memorize to remind you of truth in those moments?

3. Who in your life points you to truth and reminds you of where life is found? Consider calling them or sending a note of appreciation to them for their faithfulness in your life.

4. If you are looking for a place to love and serve image bearers of Christ, come and see us at Watermark Urgent Care!